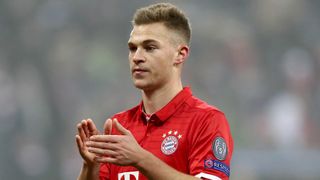 Joshua Kimmich has made it clear that he does not want to leave Bayern Munich and says he is confused by the reports suggesting he has asked to move.

Stuttgarter Zeitung reported on Tuesday that Kimmich has grown frustrated with his limited opportunities at the Allianz Arena and will seek a switch in the next transfer window.

Bayern chairman Karl-Heinz Rummenigge strenuously denied the rumour and the club vowed to take legal action against the publication.

Kimmich has himself stated that he is planning for a long-term future with the Bundesliga champions, although he has underlined his desire to be more regularly involved in the first team.

"I do not know where this message came from," he said at an event at the Paulaner Brewery in Munich. "I personally heard it directly from everyone on the training ground.

"I do not know how it happened. But it is fact that I do not want to leave FC Bayern.

"It's not just conceivable, but also my own objective, to stay at Bayern for longer - on the proviso that I play."

Kimmich has made 39 appearances in all competitions this term but only 20 of those have come in the starting line-up.

The 22-year-old has been linked with Manchester City, Manchester United, Barcelona and RB Leipzig, although Bayern's top-flight rivals stated this week that a bid would be out of the question.