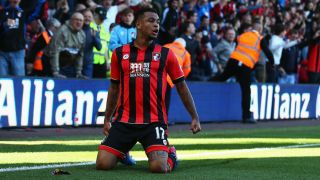 Joshua King has signed a new four-year contract with Bournemouth, the Premier League club have confirmed.

The former Manchester United striker was top-scorer for Eddie Howe's side last season with 16 goals in all competitions.

The 25-year-old was linked with Tottenham before the start of the season but insisted he never considered leaving the Vitality Stadium after committing to a new contract until 2021.

"There was a lot of talk during the summer but I always made it clear I wanted to stay here," King said via the club's official website.

"AFC Bournemouth is a great club that is always looking to improve, the manager has been brilliant with me and we have a fantastic squad.

"The future here is bright and I'm really happy that I will be a part of that."

AFC Bournemouth chief executive Neill Blake said: "I am delighted that Joshua has committed his long-term future to the club.

"During the last year he has become a key player here, both with his goals and performances, and was instrumental in the team finishing ninth in the Premier League in 2016-17.

"Joshua is the fifth player we have tied down to a new deal this summer and, combined with our four new signings, we can all be excited about the direction this club is heading in."