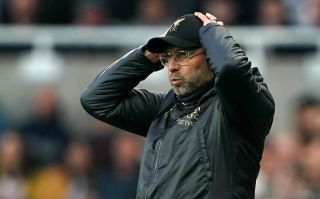 Liverpool manager Jurgen Klopp doubts whether this relentless Premier League season, where his side have gone toe-to-toe with Manchester City, will ever be repeated.

The Reds head into the final match of a campaign in which they have lost just once – to City – one point behind Pep Guardiola’s defending champions.

Liverpool need to beat Wolves and hope Brighton can take points off City if they are to win their first title since 1990.

Should both teams win Klopp’s team will finish on 97 points, the third-highest total in the history of the Premier League beaten only by City’s century last season and this season’s 98.

The destination of the title will, essentially, come down to the narrowest of margins: 11millimetres to be precise.

That was how close to going in goalline technology decided Sadio Mane’s shot was for what would have been the opening goal in their clash at the Etihad Stadium in January – a game City eventually won 2-1.

Since then both teams have been relentless in their pursuit of the title: City have won their last 13 league matches, Liverpool 10 of their last 12 (including two draws).

“The difference between City, us and other teams, who are for sure quality-wise not worse, is consistency. That’s why we have the points we have,” said Klopp.

“If you lose one game so far, it’s exceptional, and City didn’t draw many obviously.

“But it’s about becoming champions, not collecting 500 points. If next year somebody is champion with 65 or 70 points, it’s deserved and it will have been a difficult season in another manner.

“This year, we have to win each game to have a chance. I don’t know if that will happen a lot more.”

Liverpool still also have the Champions League final against Tottenham in Madrid on June 1 to look forward to.

However, Klopp insists their focus is only on Anfield on Sunday.

“You get millions of messages and nobody speaks about the weekend. It’s all ‘Unbelievable!’ and ‘All the best in the final’ but we play Wolves now,” said Klopp, referring to the reaction the semi-final 4-0 comeback win over Barcelona produced.

“It doesn’t make Tuesday night’s achievement any smaller. It was for sure one of the best moments in football history, not only Liverpool. But it has nothing to do with the weekend – except that we should be confident.

“Wolves want to show that they are not passengers, they are a real football team. I respect that, and we have to be ready.

“They are seventh in an unbelievably competitive league, from getting promoted last year.

“Wolves showed the whole year they have ambitions and can enjoy their football.

“Nuno is doing an incredible job there, which makes our job pretty difficult.

“And on the other side, Brighton. It’s their last home game of the season, and I know this team are full of joyful footballers. They will try everything.”