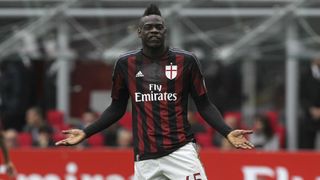 Jurgen Klopp has told Mario Balotelli he needs to leave Liverpool, but hopes to help him rediscover his best form beforehand.

Balotelli joined Liverpool from AC Milan in 2014 but, after scoring just one Premier League goal in 16 appearances in his first season at the club, he was sent back to San Siro on loan the following year.

The 25-year-old managed just to find the net just once in Serie A last term, though he missed more than three months with a groin injury, and Klopp does not see a future for him at Anfield.

However, the German hopes to help build Balotelli's confidence back up before sending him to a club where he can be a leading figure.

"Since he has been back here, he's been a good guy and I can't say anything different than that," said Klopp.

"Everything's been good, it's all okay. And now he's here, we will do everything we can to get him fit.

"We want Mario to become the player he was before his injury. The talent is still there - no doubt about it

"When we have done the crossing, heading and stuff, he's been world class. But this is not a situation where he should be battling with other players like this for one position so it's clear we need a solution.

"There will be a club around who would be happy to have a new Mario Balotelli, if you like. I have spoken clearly to the player about that.

"It's now time to make decisions and I try to help Mario to get in the best shape he can be in and we will see what happens."

Mamadou Sakho missed the Europa League final and Euro 2016 through suspension but is free to play after the doping case against him was dismissed.

However, Klopp revealed an Achilles injury means he could miss the start of the Premier League season, while refusing to criticise UEFA for banning the centre-back.

"Mama had a little issue with his Achilles when he was playing, one day on, one off, this kind of thing," said the coach.

"When he had his little 'break' he used the time to have a little bit of treatment and that now means another three or four weeks before he can train again.

"There was no surgery, he is just not about to train at the moment. He has got some rehab of course and it's not too good a situation for him, for us, everybody."

"I don't know exactly what will happen now from Mama's side or UEFA's side. But as a human being I can say it's a sad story.

"He hasn't played now for three and a half months. That's obviously not really cool, but we all know that doping is a very serious thing and we cannot have that. But I am sure they tried to do the right thing."