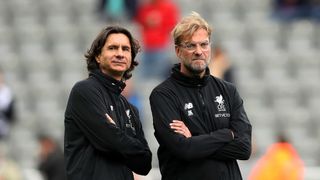 Liverpool manager Jurgen Klopp has refused to comment on speculation linking assistant Zeljko Buvac with the upcoming vacancy at Arsenal.

Reports in the Bosnian press indicated on Tuesday that Buvac was a surprise contender to replace Arsene Wenger, who is leaving Emirates Stadium at the end of the season.

There has also been speculation in the media that Klopp and Buvac - who will not be involved with Liverpool's first team for the remainder of the season for personal reasons - have fallen out.

But, speaking to the media ahead of the second leg of the Champions League semi-final against Roma, Klopp was giving nothing away.

"We gave a club statement on that and that's all we will say at the moment - nothing else," Klopp told reporters.

Liverpool midfielder Georginio Wijnaldum also opted not to give any information about Buvac when questioned by the media prior to the game at the Stadio Olimpico.

"It's something for later," Wijnaldum said. "I'm here to speak about the game and not other things."

Buvac served as Klopp's assistant at both Mainz and Borussia Dortmund and has worked with the German throughout his tenure at Anfield.