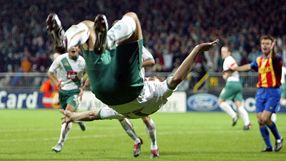 Klose, enjoying a fine season at Italy's Lazio, hopes to add to his 65 international goals against Sweden in Germany's World Cup qualifier on Tuesday.

However, an expected 80,000 crowd at the Olympic Stadium in Berlin will be treated to a more modest celebration.

"The somersault... I think I can still do it but I honestly do not want to risk it because I want to still be around in 2014," he told reporters with a chuckle.

The Polish-born forward needs only three more goals to equal the all-time German record of 68 set by Gerd Muller, but Klose refused to class himself alongside the former "bomber of the nation" who took just 62 matches to reach his tally.

"I would never compare myself to Gerd Muller," said Klose, who has so far won 125 caps.

"You should not compare him with any other striker around. What he has achieved is incomparable. I have told him that myself a few times. It is a joke to be compared to him."

Klose, who is level with Muller on 14 World Cup goals, is eager to get a chance to at least equal World Cup top scorer Ronaldo's record of 15 in Brazil in two years' time.

"In football it is difficult to plan anything but if I am fit and injury-free I would like to play in Brazil and that is my ultimate aim," he said on Monday.

Germany are top of their qualifying Group C with maximum points from three games.