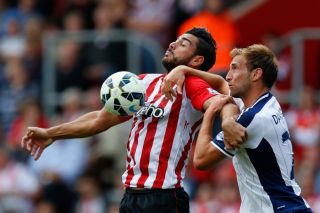 Koeman – who moved to Southampton in June after leaving Feyenoord – brought both Pelle and Tadic to St Mary's from the Eredivisie.

Tadic has shown promising early signs but Pelle, who scored 50 goals in 57 Eredivisie appearances for Feyenoord, has struggled to make an impact.

And while Koeman has acknowledged the duo both need more time to adapt to English football, he wants them to be more combative.

"It's difficult," Koeman said in the Southern Daily Echo.

"I think sometimes he [Pelle] can be a little bit more aggressive maybe, to expect in which position the ball falls down, but he needs players from the midfield and with movements around him.

"That was the reason that we changed at half-time (against West Brom on Saturday) and we bring in Shane Long to have more speed in front.

"I mean, if there comes a long ball, you have to expect something. If you wait and you go then, sometimes you are too late.

"But for Pelle and Tadic it's a higher level and they need to be stronger to be competitive in the Premier League.

"They need time for that because it's a big change. The defenders are stronger and it's more physical than in Holland.

"The qualities they have… but they need time to adapt."