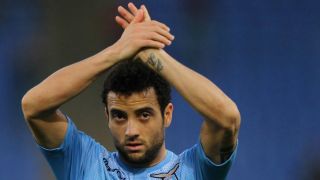 Lazio sporting director Igli Tare has claimed the Serie A side turned down a €50 million offer for Felipe Anderson from Manchester United in August and does not expect another bid in the January transfer window.

Louis van Gaal reportedly sees the Brazil international as a valuable addition to his struggling squad as he is looking to add some more pace to his attack and some suggested the 22-year-old was benched for Saturday's Serie A match against Fiorentina in order not to jeopardise a potential move to Old Trafford.

However, Tare has stressed it was for tactical reasons - Felipe Anderson came off the bench to score his side's third goal in the 3-1 win - and that Lazio have no intention of letting the highly rated winger go on the cheap.

"We have not received any offer from Manchester United this month, but we refused an offer from them on August 27 worth €50 million," Tare told Sport Mediaset.

"The only reason he was benched against Fiorentina is because he is not in his best form. He knows that himself as well and we talked with him about it this week. He needs to find the serenity that he had last season. He has the quality to get out of his current situation.

"We rejected Manchester United's offer because we think he will be worth much more once he really explodes. His situation has not changed compared to August.

"Lazio resisted offers in excess of €100m in the summer. We have a clear plan for this club."

Felipe Anderson has a contract with Lazio until June 2020.