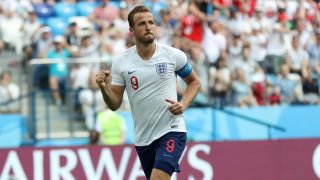 Harry Kane says it has been an easy job leading England at the World Cup so far.

The Tottenham striker took over the captain's armband from Jordan Henderson ahead of the tournament and has safely led the Three Lions through the group stages, scoring five goals in two games to lead the golden boot.

England will need Kane to lead from the front if they are to progress further in Russia, but the 24-year-old is relaxed knowing he does not have to carry the full leadership burden.

“Everything’s been going well. It’s easy for me. We have got a lot of lads who take control," he said.

“If something’s not right, they’re happy to talk to the gaffer or talk to whoever they need to talk to. It’s about doing the same.

“If lads want to talk or need help, I’ll be there to talk to them or go through the gaffer and we work it out like that.”

England face Colombia in Moscow Tuesday with the winner to face Sweden or Switzerland in the quarter-finals.