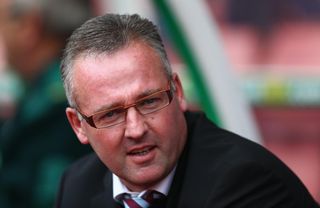 Having endured a mixed time of it in the Premier League last term, Lambert's side have been impressive in the top flight so far this season - taking four points from the opening two games.

A 1-0 win at Stoke City was followed by a goalless draw against Newcastle United on Saturday, with Villa looking far more solid at the back.

Lambert's side now switch their focus to the League Cup - a competition they have taken a liking to, having reached at least the quarter-finals three times in their last five attempts.

Runners-up in 2009-10, Villa will be strong favourites to overcome the challenge of Russell Slade's League One outfit in the second round on Wednesday and Lambert has set his sights on another lengthy cup run.

"We've started really well and I think we are playing really well," he said.

"Things are really positive at the football club at the minute. Two clean sheets is a solid base. I've been delighted with the start we've made.

"We want to win and we'll pick a strong team to try and get through. A good cup run gives the fans something."

Lambert's men will take on an Orient side who have been similarly impressive at the back, but have had to settle for goalless draws in their last two games.

Orient booked their place in the second round by winning on penalties against Plymouth Argyle and would welcome a victory as they prepare for three difficult away games in quick succession.

After their trip to the Midlands, Slade's men travel to league leaders Fleetwood Town and second-placed Peterborough United and the Orient manager is relishing the challenges that lie ahead.

"We're still a work in progress and we are improving," he said.

"We're certainly not going to get any rhythm at home but it is what it is.

"They're good games for us, the first one is the cup game at Villa and we're really looking forward to that."