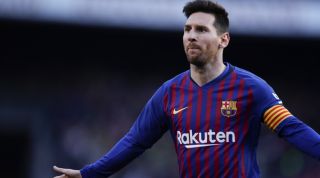 Lionel Messi scored two goals on Saturday to secure a win for Barcelona in the local derby over Espanyol, take his personal tally to take for the season to over 40 goals and equal the record for most La Liga victories.

The Argentinian has been on the winning side 334 times in the Spanish league – the same amount as ex-Real Madrid goalkeeper Iker Casillas. Messi can break the record on Tuesday, when Barcelona take on 17th-placed Villareal.

Despite the rivalry between Real and Barca, Casillas had gracious words for the Argentinian forward. The Porto shot-stopper, who played over 700 matches for Los Blancos, admitted that while he would have preferred to see a Madrid player reach the total, it was difficult to begrudge a talent like Messi’s.

"I'd have preferred it to be a Real Madrid player, but these types of records are there to be broken and he has always done a great job," said Casillas, reports Spanish paper MARCA. "He deserves the recognition."

NOW READ… How Lionel Messi finally became the player he was expected to be (no, really)