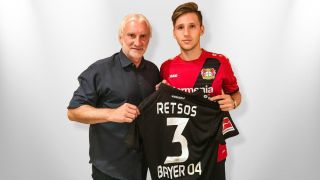 Retsos has signed a five-year contract with the Bundesliga side after becoming the most expensive Greek footballer in history.

The deal for the 19-year-old defender, who has starred for Olympiacos since making his debut in August 2016, is reported to have cost Leverkusen between €17.5million and €22m, with conflicting claims over the exact figure.

The Greek champions, who praised Retsos' contribution to the club after his exit, have signed Bjorn Engels from Club Brugge as a replacement.

"Bayer Leverkusen always played in the Champions League in the past years, despite the great competition in Germany, which impressed me very much," Retsos told his new club's website.

"The offer from such a club makes me proud and I'm looking forward to the Bundesliga, which for me is one of the best and most attractive leagues in Europe."

Sporting director Rudi Voller, whose side also sold Kevin Kampl to RB Leipzig on a busy final day of the transfer window, added: "Panagiotis Retsos had some offers from top clubs that are playing Europe this year.

"So it is all the more pleasing for us that he has decided on Bayer Leverkusen - especially since he himself has significantly contributed to the fact Olympiacos qualified for the Champions League.

"Panagiotis is a young professional with special abilities and fits perfectly into our the profile of our requirements. He is an investment in the future of the club."