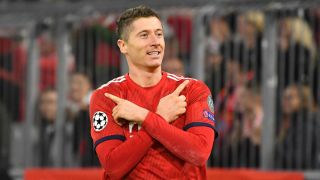 Bayern Munich will hope to bounce back from a frustrating weekend in the Bundesliga as Robert Lewandowski targets a Champions League milestone against Benfica.

The German giants are not the only top side looking for a response, with free-scoring Manchester City facing Lyon, who defeated Pep Guardiola's men earlier in this campaign.

City's group rivals Hoffenheim are on a peculiar streak as they continue to make strides in European football, while Cristiano Ronaldo has a record in his sights for Juventus.

We bring you details of all of the above and more in the Opta numbers ahead of Tuesday's Champions League action.

3 - Ajax have won all three of the sides' previous meetings by an aggregate score of 7-1.

4 - AEK are one of just two teams to have lost all four of their Champions League games this season (along with Lokomotiv Moscow). They have never lost five in a row in the competition.

49 - Robert Lewandowski has scored 49 goals in 76 Champions League games. Only six players have ever reached 50 in the competition, while the Polish striker will be the third quickest to reach the milestone if he scores in this game.

1 - Lyon have only lost one of their 10 home European games against English sides (W3 D6), with that defeat coming against Arsenal in February 2001 (0-1).

12 - City are the highest scorers in this season's Champions League, netting 12 goals in their four games so far.

12 - Hoffenheim have both scored and conceded in all 12 of their games played in European competitions.

14 - Shakhtar have not kept a clean sheet in any of their last 14 Champions League games, conceding a total of 30 goals in that run.

14 - Plzen have conceded more goals than any other side in the Champions League this season (14).

2 - Real Madrid have lost two of their last four away Champions League group stage games – more than they had lost in their previous 26 such games (W18 D7 L1).

13 - Since the start of last season, only Ronaldo (16) has scored more Champions League goals than Roma's Edin Dzeko (13).

0 - Juventus lost their last home match against Manchester United - they have never lost consecutive home games in all European competitions in their history.

3 - Manchester United are winless in their last three Champions League home games (D1 L2) in all European competitions, they have never gone four without a win at Old Trafford.

5 - Romelu Lukaku has scored five goals in his three previous appearances against Young Boys, with all five coming in his two games against them for Everton in the 2014-15 Europa League.