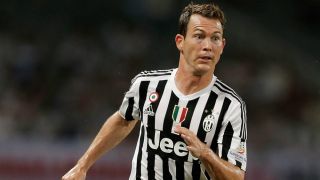 Stephan Lichtsteiner has returned to Juventus training ahead of their Champions League clash with Sevilla.

The Switzerland international was replaced by Giorgio Chiellini at half-time of Juve's 1-1 draw with Frosinone last Wednesday and was kept in hospital overnight as a result of "breathing difficulties".

Lichtsteiner sat out Saturday's 2-1 defeat to Napoli but he returned to full training on Monday ahead of the visit of Unai Emery's side in this week's second group-stage fixture.

The news follows Sami Khedira's announcement that he is approaching full fitness following a thigh problem, which has kept him sidelined since August.

"I'm happy to return to the disposal of the team and to help my team-mates, because we're Juventus and we never give up," Khedira wrote on his official Facebook page.