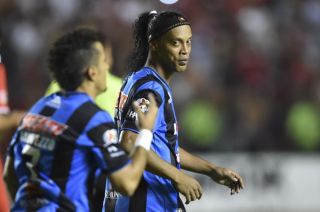 Ambriz's Queretaro entertain league leaders America at the Estadio La Corregidora on Friday, with the hosts adrift of the Apertura play-off spots with four games remaining.

After three consecutive defeats, Queretaro sit two points behind the eighth and final post-season spot, which is occupied by Santos Laguna, who are at home to fellow play-off hopefuls Pumas UNAM on the same day.

And Ambriz is aware Queretaro are running out of chances to secure back-to-back play-off appearances in Apertura.

"It's the last chance we have," said Ambriz. "We let go of many points at home and away could not add.

"We cannot fall into despair if we do it will be difficult.

"We have four games to improve what needs to be improved to be in play-offs."

Star recruit Ronaldinho was on the scoresheet last week - scoring the opening goal - though Queretaro went on to lose 2-1 at Tijuana.

The Brazilian icon has still come in for criticism, however, since moving to Mexico but Ambriz leapt to the defence of his prized asset, who has scored three goals in five matches.

"Ronaldinho will bring good things," he said. "Things are going to fix and have many joys."

Opposing coach Antonio Mohamed, on the other hand, insists America will not be taking their foot of the pedal as they strive to finish top of the standings.

"We aim to finish first overall, then to get the internal target forces us to win games and we prepare to win, then there is no relaxation. The team is 100 per cent," said Mohamed.

Toluca will be out to consolidate second position when they host defending champions Leon on Sunday.

On Saturday, third-placed Atlas welcome Puebla to the Estadio Jalisco.

Monterrey will be desperate to return to winning ways after losing to rivals America last week when they host Tigres UANL.

Both teams are level on 23 points and goal difference (+6).

Lowly Universidad Guadalajara can make it four games undefeated with victory at Pachuca.

Cruz Azul - a point adrift of the play-offs - should get the job done against cellar-dwelling Morelia, while Chiapas travel to Veracruz.