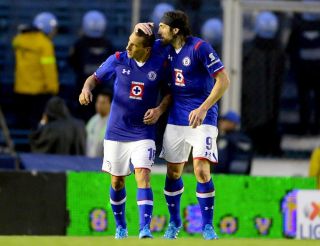 America were routed 4-0 by rivals Cruz Azul after conceding three goals in the final five minutes at the Estadio Azul on Saturday.

Argentine striker Mariano Pavone got the ball rolling in the 15th minute before Christian Gimenez, Gerardo Flores and Joao Rojas completed the emphatic win late on.

The win helped Cruz Azul sneak into the top eight with 16 points from 12 matches as the race for the Apertura play-off places intensifies.

While America had lost two of the past three league meetings between the teams, Antonio Mohamed's men went into the clash full of confidence having won three games on the bounce.

America only conceded two goals in that period, but their defence was overawed against Cruz Azul, who took an early lead in stunning fashion.

After winning the ball in his own area, Mexico international Pablo Barrera picked out Mauro Formica with a diagonal cross and the midfielder played in Pavone, who volleyed powerfully into the roof of the net.

Cruz Azul ran rampant in the closing stages, substitute Gimenez adding the first of three goals in the 85th minute.

Flores also came off the bench and scored in the 90th minute, while Ecuadorian Rojas completed the scoring in stoppage time.

Enrique Perez's 24th-minute goal was all that separated Atlas and Guadalajara on Sunday.

His effort was enough to see Atlas jump into second spot ahead of Monterrey, who needed a 90th-minute equaliser to salvage a 1-1 draw at home to Tijuana.

In other results, play-off hopefuls Tigres UANL and Pachuca both registered wins.

Tigres UANL - fifth in the table - downed Veracruz 1-0, albeit courtesy of a Leiton Jimenez own goal.

Fourth-placed Toluca played out a 1-1 draw with Puebla, while basement side Morelia overturned a two-goal deficit to earn a 2-2 draw at Santos Laguna, who occupy seventh place.