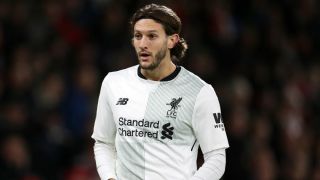 Liverpool midfielder Adam Lallana has suffered an injury setback that will keep him out of Saturday's FA Cup fourth-round clash with West Brom at Anfield.

The 29-year-old, who only made his first start of the season against Burnley on January 1 after returning from a thigh injury, has sustained what has been described by manager Jurgen Klopp as "a little tear".

The England international is therefore expected to miss the clash with Alan Pardew's side, along with Ragnar Klavan (illness) and James Milner (dead leg).

"Adam Lallana again unfortunately has a little issue and I'm pretty sure is out of the next game," Klopp told a news conference. "It's not a big one but it's how it is when you've had a long injury. You need time to adapt to the intensity of a Premier League game.

"Milly got a dead leg in training and if Milly says it's too painful in training, you can imagine how painful it is. Raggy is out. He was really ill and lost a few kilos. Now he has a little, little muscle issue. Not too serious, but he is not available.

"[Nathaniel] Clyne's on a good way, though still not in team training. Dejan [Lovren] is back. It's the time of the year!"

Asked for more details on Lallana's problem, he said: "It's a little tear. It's really not a big one. The knee is okay. Nobody told me something about his knee."

Jordan Henderson has returned to fitness, however, having not played since December due to a hamstring injury.

The midfielder has been forced to fight for his place at times this season but Klopp insists he is delighted with the way he handles his responsibilities as captain, especially away from matches.

"Jordan Henderson's a perfect captain for us," he said. "If he's not on the pitch, vice-captain is James Milner, but they are still the captain and that's very important.

"There are so many things around a big club like Liverpool, a lot of things to talk to me about and things like that, so that's the job to do. On the pitch, you need to share responsibility.

"I was captain for many years. It can be an important job but we cannot change it. I don't think you make it too big, in this club it's maybe a little bit different. I'm really happy about Jordan's captaincy."

Klopp, who confirmed Simon Mignolet will start in goal, says he is looking forward to the prospect of a match played, unusually, at 19:45 local time on a Saturday.

"To be honest, I like night games. Saturday is a night people don't go to bed early, I think it's a good time to play football," he said. "It's much better than 12pm, I'm hungry at 12pm!

"It's important we create a special atmosphere. Mainly we've had good games in the last few weeks, but we have reasons to step up again.

"It's a cup game, the biggest difference in Germany is that there will be a winner after the game, in England it's slightly different. We really want to go through to the next round and to do this we need to perform."