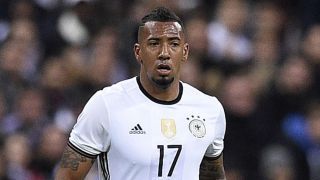 Germany head coach Joachim Low has offered his full support to Jerome Boateng as the Bayern Munich defender looks to recover from injury in time for Euro 2016.

Boateng sustained an adductor injury in Bayern's 2-1 win over Hamburg on Friday, with the problem reportedly set to keep him out for at least three months.

The centre-back - who started all seven games in Germany's triumphant World Cup campaign in 2014 - expressed his confidence of being fit in time for the finals, which get under way in France in June.

And Low says Boateng will be afforded every possible opportunity to complete his recovery.

"We will support him," the coach said. "I have spoken with Jerome and told him that I believe in him and he can still do it despite the serious muscle injury.

"Just like with Sami Khedira before the 2014 World Cup in Brazil we will keep the door open as long as possible for him.

"Jerome is a fighter and a top professional. He has the will and the attitude to do whatever it takes.

"Now he needs patience and should not be put under pressure."

Philipp Lahm, meanwhile, expressed sympathy for his team-mate, claiming the news soured the win over Hamburg.

"For us this is very, very bitter, because it is not days or one or two games, but for a longer period, which hurts a lot," he said.

"Jerome is a top performer for us, it is a pity that he is out for weeks, it clouds the victory a bit."