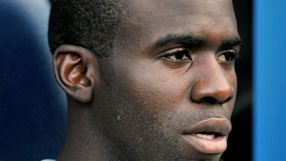 The Bolton Wanderers midfielder shocked the football world went he collapsed with no one around him in an English FA Cup quarter-final at Tottenham Hotspur.

"It would be great to play football again and I hope that it will happen," he told Britain's Sun on Sunday newspaper in his first interview since his heart stopped working on its own for 78 minutes. "But it is even greater just to live life and love my family. I'm a lucky man."

On Monday, two days after Italian footballer Piermario Morosini died after a similar collapse, Muamba left hospital just a month after the incident but doctors are puzzled by his cardiac arrest.

"I've had lots of tests but it's still not clear exactly what caused my collapse and perhaps we'll never know," added the England Under-21 player, who now has a "zapper" in his chest which could shock his heart back to normal if it reoccurs.

"It may never happen again and now I have to take each day as it comes and appreciate every single moment of the life God has given me as a wonderful gift."

Muamba had trained well all week before his collapse but does remember something was not right in the minutes prior to the incident.

"I don't even get colds very often, I've never had any problems with my heart. I remember feeling particularly fit and was really looking forward to the match," he said.

"I ran upfield to try to get on the end of a cross from Martin Petrov on our left wing and as I ran back into midfield I felt very slightly dizzy.

"It wasn't normal dizziness - it was a kind of surreal feeling like I was running along inside someone else's body. It's hard to explain. Then I made another burst forward and noticed it again.... but then my vision started to go.

"I had no pain whatsoever."