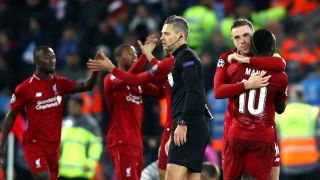 Former Liverpool pair Luis Garcia and Steve McManaman are united in their confidence that the Reds will have too much for Bayern Munich in the last 16 of the Champions League.

Liverpool finished second to Paris Saint-Germain – who will face Manchester United – in Group C, and that resulted in them being paired with German champions Bayern in Monday's draw.

Despite Bayern's talent and rich history, however, Liverpool are likely to go into the tie favourites given their respective starts to the season.

Bayern are third in the Bundesliga, nine points behind pacesetters Borussia Dortmund, while Liverpool – following Sunday's 3-1 win over United – are top of the Premier League.

As such, both McManaman and Garcia fancy Liverpool's chances of reaching the quarter-finals.

"We were always going to get a difficult one," McManaman told UEFA. "No disrespect to Porto, but that was probably the side you would've wanted.

Fixture newsThe first leg will be played at Anfield on 19th February 2019. The return fixture will be at the on 13th March December 17, 2018

"But I thought it was fine, Bayern are not the team they once were. Not be disparaging, but they have shown that this year in the Bundesliga, that they're not firing on all cylinders.

"They've a huge amount of experience, but I think this young, exuberant, quick Liverpool team should be too good for them, to be honest."

Garcia added: "It's not the team I would've picked, but if you want to get to the final it doesn't matter.

"Last year they [Liverpool] got to the final and it's the same faces [in the team]. It's a good fixture, everybody will be excited, and the team right now isn't scared to face anyone."

Liverpool were beaten finalists last year, but McManaman is convinced Jurgen Klopp has a strong team at his disposal, while he feels Bayern are paying the price for not transforming their entire squad after hiring Niko Kovac.

"It [Liverpool's team] is quicker, stronger and has that bit of added experience from last year," McManaman said.

"I think this Bayern team needed a complete revamp under their new manager, so they're under pressure themselves, certainly because of the way they've started his year in the Bundesliga.

"But if you look at Liverpool, the fact they're top of the Premier League as we're speaking, I think Liverpool are in a really good place."