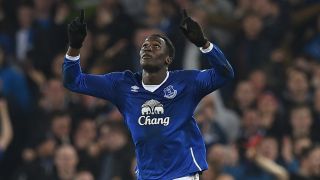 Louis van Gaal described Everton striker Romelu Lukaku as a "very interesting" option for Manchester United as they look to strengthen their attack.

The Belgium international has been in superb form this campaign, scoring 18 goals in 29 Premier League outings, while setting up six more ahead of Sunday's match against United.

Lukaku's good performances have not gone unnoticed elsewhere and Van Gaal is keeping a close eye on the 22-year-old's situation at Everton.

"Lukaku is a very interesting player, but I think every club in the world is looking at strikers," Van Gaal was quoted as saying by Daily Mirror.

"When you score a lot of goals, you are always a potential candidate for clubs. Football is like that.

"When you look at scoring goals and providing assists, Lukaku does it at the highest level in the Premier League."

Lukaku has a contract with Everton until June 2019.