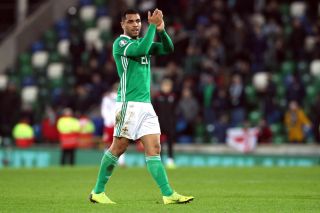 Josh Magennis’ late goal saw Northern Ireland make it two wins out of two in Euro 2020 qualifying with a 2-1 victory over Belarus.

The second-half substitute struck with three minutes left at Windsor Park after Igor Stasevich’s deflected shot in the first half had cancelled out Jonny Evans’ header within three minutes of it going in.

Magennis’ fifth international goal could be of huge importance to Northern Ireland, who had identified their opening home games against Estonia and Belarus as must-win, and have now done just that.

Michael O’Neill had named an unchanged team, hoping to build some momentum on the back of the encouraging second-half performance in Thursday’s 2-0 win over Estonia which had got the campaign off to an ideal start.

Belarus arrived in Belfast on the back of a 4-0 thrashing by Holland on Thursday, and Northern Ireland were hoping for easy pickings.

But after coach Igor Kruishenko made five changes, including the restoration of 37-year-old former Arsenal and Barcelona midfielder Aleksandr Hleb to midfield, they would prove stubborn opposition to break down.

After a slow and often scrappy start, Paddy McNair produced Northern Ireland’s first chance after 20 minutes, turning his man and cutting inside before hitting a rising shot which Andrei Klimovich clawed to safety.

Just before the half-hour, Kyle Lafferty hit an optimistic raking shot from distance but after it bounced awkwardly for Klimovich, Northern Ireland would make the resulting corner pay.

They took it short, with Niall McGinn’s corner flicked on by Steven Davis for an unmarked Evans to head home.

⚽ Jonny Evans' goal was his third in a Northern Ireland shirt. We'd all love him to add to that tally tonight #GAWA 💚 pic.twitter.com/C10JcSi5Qp— Northern Ireland (@NorthernIreland) March 24, 2019

But the celebrations lasted less than three minutes before Belarus hit back. As the Northern Ireland defenders stood off, Stasevich hit a shot from the edge of the area which deflected off Stuart Dallas to loop up and over Bailey Peacock-Farrell.

Northern Ireland sought a response, but though Dallas’ long throw fell for George Saville inside the goal area, the angle was tight and the Middlesbrough man shot straight at Klimovich.

Jordan Jones, having done well to keep in an over-hit pass, then played a dangerous ball in but Lafferty stood flat-footed as it whistled across the face of goal, keeping it all square at the break.

Lafferty’s blushes were spared by the assistant’s flag four minutes into the second half, when he really should have nudged home McNair’s cross from point-blank range.

McNair was next to try his luck when the ball rolled out invitingly for him in the 58th minute, but Mikhail Sivakov stood strong to repel the shot.

Lafferty tried a looping shot with his back to goal but could not keep it down before Dallas surged into the box but saw his low cross – looking for Lafferty – cut out for a corner.

Lafferty spurned another chance in the 77th minute as Lewis’ cross seemed to skim off the top of his head with the goal gaping, with the Rangers striker guilty of not attacking the ball.

It would prove his last involvement as he was swiftly replaced by Liam Boyce.

They got their reward three minutes from time with one of the best moves of the game.

Magennis started it by bringing down a long ball and spreading it wide for Dallas, who in turn fed McNair. His low cross was perfectly placed for Magennis to turn it home with a simple finish.

Belarus responded with a late burst of pressure, requiring Peacock-Farrell to make a close-range save from Pavel Nekhaychik, but Northern Ireland hung on for victory to the delight of Windsor Park.