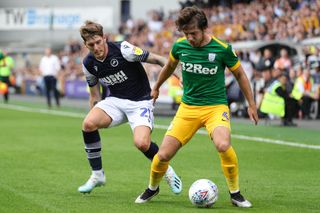 Connor Mahoney has been a slow burner at Millwall but Lions assistant manager Callum Davidson believes he is emerging into a match-winner after a routine FA Cup win over Newport County.

The winger, signed from Bournemouth last summer, broke a 20-game goalscoring duck on New Year’s Day against Luton and scored a second inside four days as County were outclassed.

Davidson believes there is a lot more to come from the 22-year-old and wants him to start dispatching higher-quality opposition than their League Two visitors.

“Connor has had a slow start to his career at the club but, when you watch him in training, he’s probably one of the most talented players we’ve got,” said Davidson.

“It’s now for him to turn that into match-winning performances. What he did on New Year’s Day gave him a boost and gave him that little bit of belief in himself.

“He has that ability and he can produce quality bits of magic when he needs to.

“I thought he was probably the bright player in our team against Newport, he stood up and said ‘I’m going to be the man to produce.

“In these kind of cup games we know if the underdogs get the first goal it becomes really tough so we were delighted to get that and to be in the next round.”

Millwall’s fine run under Gary Rowett continues. They have been beaten once in their last 12 matches in all competitions and sealed a third successive victory on home soil.

The Lions, FA Cup quarter-finalists in two of the last three seasons, quickly showed they had the measure of the Welsh side and Matt Smith broke the deadlock in the seventh minute, steering home from a corner.

Mahoney looked in the mood from the off, beating two defenders to wriggle into the box but failing to round former Millwall man Tom King in the Newport goal.

Mahoney was denied again in the 32nd minute when his goal-bound effort was deflected behind by Padraig Amond.

Newport started the second half brightly but Jon Dadi Bodvarsson was fouled in the area by Mark O’Brien and Mahoney sent King the wrong way from the spot to cap his fine display with a goal.

Bradshaw killed off the contest with a neat finish at the near post, with Rowett’s men now beaten just once in their last 12 games.

Newport have claimed the scalps of Leeds, Leicester and Middlesbrough in recent seasons but never threatened an upset.

“There’s no giantkilling this year, but getting to the third round is an achievement and there’s definitely no embarrassment losing to Millwall away,” said County chief Michael Flynn.

“There were a lot of positives out there from the players playing against a team who were 54 places above us and they knew they were in a game.

“Once again we missed too many chances and we gave away a very sloppy goal – all the hard work you do is undone after seven minutes so it’s a bit frustrating.

“The first goal left us with a lot to do. But we got back into the game and I thought we were the better team for the first 20 minutes of the second half.

“We should have equalised so it’s frustrating but you’ve got to give credit to Millwall, we were chasing it in the end and they punished us.”