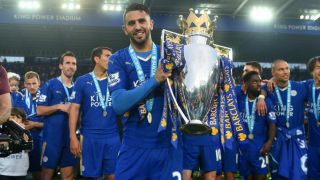 Figures of £45m had been quoted for Mahrez, who has apparently attracted interest from the likes of Barcelona, as well as Arsenal and Chelsea.

Speaking after Leicester began pre-season with a 2-1 win at Oxford United, in which Mahrez played the first half, Ranieri revealed the Algeria star will follow in the footsteps of Vardy.

"I think everybody here are happy and then, it's finished. The market is finished," he told Sky Sports News.

Pressed on Mahrez's specific future, the Italian beamed: "Yes, he wants to stay."

The news will boost Leicester supporters further after title-winning captain Wes Morgan signed a new contract, which runs until 2019, earlier on Tuesday.