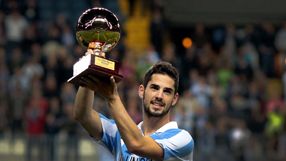 The 20-year-old playmaker, who is on the fringes of the Spanish national team, has agreed an improved salary and will continue to be tied at Malaga until 2016.

"There were offers but it was my aim to stay here. I want to continue developing as a player and there is no better place to do that than with Malaga," Isco told a news conference.

"It wasn't that important to extend the number of years. I still have this season and three more years."

"The whole of Malaga was awaiting this moment. We want him to be the leading figure of our project," said Husillos.

Isco was voted by coaches the 'revelation player' of La Liga last season and he won the 'Golden Boy' trophy as the best Under-21 player in Europe.

The youth international was called up into Vicente del Bosque's provisional squad for Euro 2012 and he has been a leading light as Malaga have impressed in their first Champions League campaign.

The Qatari-owned club are through to the last 16 in Europe where they will play Porto next month, and they also lie fourth in La Liga.