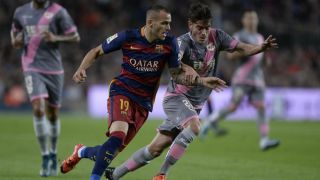 Malaga have announced the signing of forward Sandro Ramirez following his departure from Barcelona.

The 20-year-old, who joined Barca's youth system in 2009, has agreed a three-year deal with Juande Ramos' side.

"The Canarian forward Sandro Ramirez Castillo, formerly of Barcelona, is now a Malaga player for the next three seasons," a club statement released on Thursday confirmed.

The Spain Under-21 international won two Liga titles, two Copas del Rey, the Champions League, the UEFA Super Cup and the Club World Cup during a glittering early part of his career with Barcelona.

Sporting director Robert Fernandez confirmed in May that Sandro would be allowed to leave Camp Nou after declining to take up the option to extend his contract.

Tottenham were among the clubs linked with his signature before he agreed terms on a move to La Rosaleda.

Sandro only scored three goals for Barca last season - all in the Copa del Rey.

"I'm delighted to be part of this great club," said the former Inter and Basel midfielder. "It's a wonderful oppportunity for me to play in the Spanish league.

"Malaga are a great club and, when I heard the name, I decided quickly."