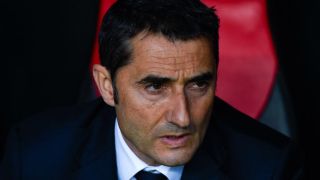 As the new head coach of Barcelona, Ernesto Valverde becomes the latest man to tackle a challenge like no other in world football.

Luis Enrique's reign was gloriously laden with trophies but Barca's weekend triumph over Alaves in the final of the Copa del Rey was the only silverware to emerge from 2016-17.

Real Madrid are top dogs in Spain once more and restoring the Catalans' recent dominance of LaLiga will be the minimum expected of Valverde, who will find the respected coaching talents he honed at Athletic Bilbao, Espanyol, Olympiacos, Villarreal and Valencia put under the harshest scrutiny.

A keen photographer away from football, the 53-year-old must work with sharp focus and avoid too many negatives when taking his shot at greatness.

Valverde might have Neymar to thank for getting the Barcelona job, but not courtesy of a glowing recommendation. Following a training ground row with Luis Enrique's number two and now incoming Celta Vigo boss Juan Carlos Unzue earlier this month, the Brazil captain reportedly told the Camp Nou powerbrokers he would not play under the former Sevilla goalkeeper. This provides a snapshot into the sway held by Barca's collection of elite superstars, the type of players Valverde has precious little experience of managing.

Recent Barcelona and Real Madrid history shows big-name bosses such as Pep Guardiola and Zinedine Zidane prevail by ensuring the egos fall into line, while previously respected tacticians of the ilk of Gerardo Martino and Rafael Benitez fare less well. Valverde certainly has more in common with the latter category and must stamp his authority early.

Egos aside, Barcelona's dazzling front three should be a delight for any coach. At the other end of the field, Valverde will find a different story. The Blaugrana might have boasted a better LaLiga defensive record than Madrid this season but they were pulled apart with worrying ease in away Champions League losses to Manchester City, Paris Saint-Germain and Juventus.

Failing to replace Dani Alves at right-back was a major mark against Barca's increasingly slapdash recruitment policy, while Jordi Alba lost his status as a guaranteed starter on the other side of the defence. Indeed, the hybrid 3-4-3 Luis Enrique used in the aftermath of the Paris mauling seemed partially designed to eliminate the need for full-backs entirely. In his first season back at Athletic in 2013-14, Valverde ensured his team conceded 26 goals fewer than the one he inherited from the genial Marcelo Bielsa. He will need all of that nous.

During a brief and unremarkable playing stint with Barcelona, Valverde was coached by Johan Cruyff, while four years as the sequel to "Bielsismo" in Bilbao means he is steeped in the ways of the other great influence on the modern Barca style that reached its zenith under Guardiola.

Luis Enrique took a more direct approach to unleash the awesome talents of Lionel Messi, Luis Suarez and Neymar and was rewarded with the treble in 2014-15. More recently, this recalibration has not been so successful and arguably robbed the team of its instantly recognisable and beguiling passing style. Valverde's knowledge of the Barcelona manual means he knows what is expected of him in this rewiring job.

Barca greats at the end of a cycle

Luis Enrique asking for a few more direct passes is not the only reason Barcelona do not dazzle as they did five years ago. Time waits for no one. Andres Iniesta's workload must be carefully managed, his imperious midfield partner Xavi has long since left the stage.

If Valverde sees out his contract, he will oversee the probable decline and possible departure of stalwarts such as Gerard Pique and Sergio Busquets. Lionel Messi is growing old with ravishing grace but having to recycle what remains of one of the most celebrated club sides of all time might be Valverde's most daunting task of all.

Getting the second tier to step up

Barcelona's reliance on their forward firepower and the decline of their midfield mastery has been thrown into an unforgiving light by recent recruits failing to hit the mark. Arda Turan, Andre Gomes, Denis Suarez and Paco Alcacer are among those to have failed to reproduce the performances that persuaded Barca to buy them in the first place.

Having operated with distinction amid Athletic's famed self-denial, Valverde is well versed in getting the maximum from resources already in place. He must ensure a presently uneven Barca can rotate between its main actors and supporting cast in the manner Zinedine Zidane did so effectively at Madrid this season. Polishing a few diamonds like Carles Alena and ending a fallow period for the youth production line at La Masia would also go down very well with the Camp Nou faithful.