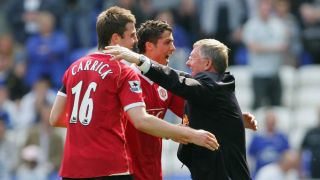 United confirmed in a club statement on Saturday that a procedure undergone by Ferguson had gone well, with no further medical updates released since.

Carrick was brought to United by Ferguson in 2006, the midfielder going on to become the club's captain.

"I was devastated," the former England international told MUTV. "I got a text on Saturday evening and I couldn't quite believe it. It didn't really sink in. I was just devastated.

"It's one of them where you start hearing different things which is quite dangerous and quite disturbing. I just stayed calm and spoke to a few people at the club to get a bit of a rundown on how he was doing.

"The whole world showed their support and I was just concerned about him, as an ex-manager and a friend - as he was to everyone. It was the effect he had on everyone. He means a lot to me, as he does to this club.

"It was a tough night on Saturday and we were waiting for some positive news. We were all praying for him and thinking of him, [Ferguson's wife] Cathy and the family. It's a tough time for everyone but I'm thinking positive and hoping he will pull through."

Absolutely devastated to hear about Sir Alex being unwell in hospital. All my thoughts and prayers are with him and his family.  Be strong Boss xxMay 5, 2018

Rivals Manchester City and Liverpool are among the clubs have sent messages of support to Ferguson, which Carrick said demonstrates Ferguson's importance to the sport.

"It just shows you the mark of the man and the respect he had," Carrick said. "The whole football world is incredible but outside of that as well, from all corners of the globe and different walks of life, people have shown their support. That's the effect he had on people."

Ferguson, 76, won 13 Premier League titles at United and is regarded as one of the greatest managers in football history.