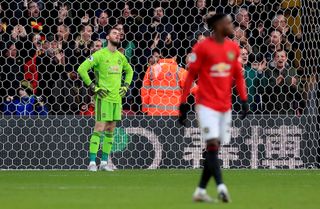 Manchester United are believed to be planning on backing Ole Gunnar Solakjaer even further in the transfer market this summer.

The club signed Bruno Fernandes from Sporting Lisbon for £47m plus bonuses in January.

Fernandes has shown what good recruitment can do by already getting off the mark for goals and assists.

The United board are keen to keep their good momentum going but need to address the wage bill before doing so.

The Red Devils could be on course to sacrifice their goalkeeper David De Gea as part of a summer clear-out, according to Goal.

De Gea was handed a contract extension only last September that would see him stay at the club till 2023 as one of their highest earners.

But his form has reportedly concerned Man United staff and his dressing room clout is not what it once was following being overlooked for the captaincy.

De Gea is believed to have potential suitors in Juventus and PSG, who could both afford to pay his hefty wages.

United, meanwhile, are keeping an eye on their loanee Dean Henderson, who has helped Sheffield United produce one of the best defensive records in the Premier League.

Henderson is said to be viewed by many as a future number one at Old Trafford and that he may even be ready to take the shirt next season.

Other players that United are looking to shift are loanees Alexis Sanchez, Marcos Rojo and Chris Smalling.

All of the aforementioned players are seen as surplus to requirements and it's understood that the club are seeking buyers to offload them to.