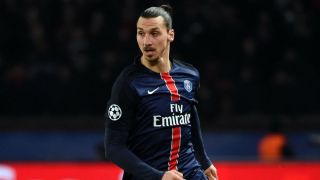 Juan Mata has confidence that any move to sign Zlatan Ibrahimovic would be warmly welcomed by Manchester United's players.

The 34-year-old striker is out of contract with Ligue 1's dominant force Paris Saint-Germain at the end of the season and has been linked with a number of Premier League clubs, including United.

Asked about the prospect of a switch, Mata paid tribute to Ibrahimovic's accomplishments as well as his continued effectiveness despite being in the latter stages of his career.

"I don't decide that, he decides that and the club decides that, but obviously I think every player would be happy to play with him.

"He is probably the best in Sweden's history for what he represents. He has played in so many countries and leagues and won trophies everywhere.

"That speaks about his quality as a player and his importance for PSG and in the national team where he is a captain."

In-form Ibrahimovic has scored 35 goals in 40 appearances in all competitions for PSG this season.

He will attempt to dump United's rivals Manchester City out of the Champions League when the sides meet across two legs next month.