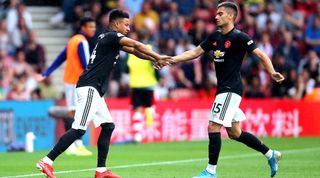 Manchester United are ready to sell both Jesse Lingard and Andreas Pereira this summer, according to the Express.

United have set their sights on signing Jack Grealish from Aston Villa and Lingard and Pereira will need to leave to make space in the squad.

Both were left out of the match day squad for the 3-0 Premier League win against Watford on Sunday, leading many to believe they are not in manager Ole Gunnar Solskjaer's long term plans.

The club is hopeful of agreeing a deal for Grealish before the next transfer window opens as Solskjaer continues to regenerate his midfield.

Bruno Fernandes arrived from Sporting Lisbon in January and has made a good start to life at Old Trafford, scoring his first goal from the penalty spot in that victory over the Hornets.

The Red Devils have enjoyed an upturn in form in recent times and jumped two places up the table last weekend. They are now fifth and three points behind fourth-placed Chelsea.

Lingard has managed just 23 minutes of league action in their last six matches, failing to make the squad on three occasions.

Pereira has been used more regularly, but is still expected to make way for the arrival of Grealish - if a deal can be agreed with Villa.