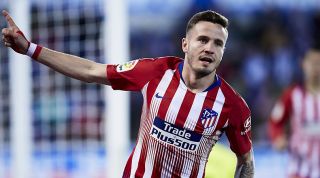 Saul signed a new deal last year that would keep him at Atletico until 2026 which would indicate commitment.

However, the Spaniard's standing in the team has grown and his change of agency has sparked new problems for Los Rojiblancos.

Following the sale of Diego Godin and Juanfran, Saul has emerged as one of Diego Simeone's leaders in the side.

He has also been filling in at left-back for Atleti in times of need, despite being one of their best central midfielders.

Saul's proven versatility has reportedly made him even more valuable to Simeone and his system, in turn making him indispensable to the club.

But the 25-year-old recently switched agents and joined Stellar Group, which is led by Johnathan Barnett - Gareth Bale's agent.

Despite being based in the Spanish capital, the group has significant connections to England.

According to Mundo Deportivo, Premier League rivals Manchester United and Manchester City are interested in the number eight.

United have been the most heavily linked club to Saul in the past and it's understood that he's a long-term target for the club.

With Paul Pogba stalling on a new contract, it could be that the Spain international is seen as a potential replacement.

City have also weighed up bids for Saul in the past, if previous reports are to be believed - with Pep Guardiola supposedly a fan.

The biggest hurdle for both clubs is that Saul's current release clause is €150m (£139m) and Atletico are unlikely to accept much less for one of their crown jewels.

Quiz! Can you name the top 20 rated players from every FIFA game in the last decade?

Better off or not? How cancelling the season completely would affect every Premier League club