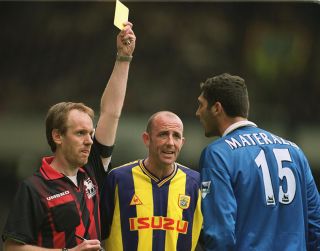 The defender moved to Goodison Park after helping Perugia bounce back into Italy’s top flight at the first attempt following relegation – scoring five goals in 33 appearances – and soon made an impression on the blue half of Merseyside.

Materazzi, then 25, scored the winning goal and was sent off in only his eighth game, against Huddersfield, then saw red twice more in his solitary Premier League campaign before returning to Perugia. However, he maintains that the last of those dismissals – in the last of his 33 Everton games – was an injustice.

SUMMER SALE Just £9.99 for the first six months with a FFT subscription

Speaking in the August 2020 issue of FourFourTwo – out now in shops and available online with free delivery – Materazzi says, “You must always evaluate how the red cards came about. I remember one, against [Coventry’s] Darren Huckerby – there was a picture of me crying by the advertising boards. That red card, in my opinion, was completely wrong. But you know how it works in England – when it’s a red, it’s a red. There is no excuse. It taught me something.”

Materazzi would soon earn the first of 41 caps for his country and seal a €10 million switch to Inter – where he made nearly 300 outings and sealed a treble under Jose Mourinho in 2009-10 – and the World Cup winner explains that playing in his homeland was crucial to his chances of an international call-up.

“I learned what it means to be a stranger in a new country [at Everton],” he says. “When foreign players come to Italy, they say they need time. It was good to try that experience and it helped me.

“For a guy who goes to England, the returns home as he wants to represent his country – because in those years, you wouldn’t play for Italy if you weren’t in Serie A – imagine what pushed me to come back: the Azzurri dream.”

Read the full chat with Materazzi in the August 2020 issue of FourFourTwo – featuring an exclusive interview with Arsenal great Dennis Bergkamp. We also remember more era-defining icons, ask Djibril Cissé your questions, hear the confessions of Nile Ranger, remember when Celtic halted Ranger’s charge for 10 titles in a row, speak to Bayern Munich’s Joshua Kimmich, mourn Atalanta’s season of muted celebrations and much more. Grab a copy in shops or online!