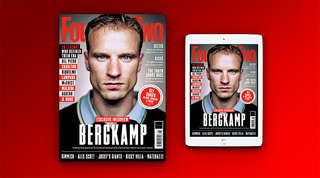 First a message from our editor, James Andrew

Football’s return has been a huge relief to many. While not to downplay the severity of the pandemic, it’s clear that our game means so much to so many, and its return has brought some light relief.

On that note, huge congratulations to Jurgen Klopp and Liverpool for winning their first top-flight title for 30 years. This season may have been unlike any before it, but there is no doubt that they are very worthy champions.

In this issue, we bring you an exclusive chat with Dennis Bergkamp. It’s now 25 years since the non-flying Dutchman landed at Arsenal and helped to transform the Gunners as one of the most iconic players of a generation. He tells us all about that journey, while we hail 20 other legends who each defined an era.

Elsewhere, Marvin Sordell and Liam Rosenior tackle the issue of racism in a fascinating conversation with FFT, discussing what can be done to help make the game more inclusive. We also hear a very honest account from Nile Ranger about his off-field troubles, which really does have to be read to be believed.

Enjoy the magazine – order yours now with free delivery now.

Reminiscing with the Iceman

It almost started with a scuffle at a petrol station, but ended with a statue. Now, 25 years on from his Highbury arrival, FFT speaks to the Arsenal legend who transformed a club forever.

Icons who defined an era

When Celtic stopped 10 in a row

Celtic’s charge for a record 10th consecutive title is the talking point of 2020/21 in Scotland. But back in 1997-98, it was the Bhoys who had to stop Rangers from landing that holy grail...

Twitter isn’t the place to find a constructive conversation on the Black Lives Matter movement. Instead, FFT had a frank discussion with two ex-pros who are now on the FA’s Inclusion Advisory Board.

This is Alex Scott’s world

The former England full-back has battled Twitter trolls to blaze a pathway for female peers in the football media, but that barely skims the surface when it comes to the life of an influential new icon at the front of change.

The Bayern Munich man’s summer hasn’t exactly panned out as expected, but it’s not over yet: with a fifth straight Bundesliga medal already in the bag, attention now turns to the Champions League. He tells FFT about ending seven years of hurt, life in lockdown – and getting handy in the garden...

Ricky Villa and the Falklands

The Argentine was Spurs' hero en route to 1981 FA Cup Final success, but the Falklands War forced him to watch their 1982 showpiece as a tormented bystander. Yet, caught between feuding nations, he emerged an adored icon.

Between The Lines: Nile Ranger

He was tipped for the top after making his Newcastle debut aged 18, but the striker – now 29 – has been a free agent for two years after leaving Southend. He tells FFT about his troubled past, long list of regrets... and why he still hasn’t given up hope of one last chance.

‘The Goddess’ have reached the quarter-finals in their debut Champions League campaign, but revelry has been muted in Bergamo: the epicentre of Italy’s coronavirus outbreak.

In 1986 and ’87, millions of children tuned in to watch darts commentator Sid Waddell’s drama about a retired Geordie footballer coaching kids – then it vanished from our screens. FFT learns what happened…

You Ask The Questions: Djibril Cissé

The former Marseille, Liverpool and France striker reveals all about flashy pants, leg breaks, being the Lord of the Manor of Frodsham, and potentially coming out of retirement to score one final goal.

Michu tells FFT he loves Welsh seaweed, Marco Materazzi reflects on World Cup glory, Kasey Keller explains why he lived in a castle, and Lawrie Sanchez insists he paved the way for Vinnie Jones at Wimbledon.