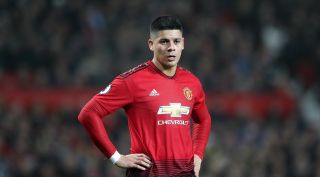 Marcos Rojo was poised for a move to Everton on deadline day, but the clubs couldn't find an agreement.

According to the Daily Mail, there was an initial loan deal in place, but United changed their stance on Thursday morning.

The Red Devils reportedly wanted the move to be a permanent one, somehting which Everton were reluctant to agree to.

The Toffees ended up signing Alex Iwobi from Arsenal for a reported £38 million, and couldn't stretch their budget to Rojo as well.

Rojo will now have to compete with Harry Maguire, Victor Lindelof, Chris Smalling and Phil Jones for gametime at Old Trafford.

The player wasn't the only one left frustrated, as Everton were left without a much needed central defensive addition.