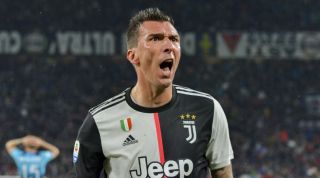 The Croatia international is believed to have been discussed during talks over a potential Romelu Lukaku-Paulo Dybala swap deal.

However, his move will be a separate affair that will cost the Red Devils €10-15 million, Tuttosport reports.

The two clubs are in advanced talks for the 33-year-old and the deal could be confirmed on Monday.

United enquired about the availability of Mandzukic at Easter time this year, but the striker turned them down having signed a contract extension in April.

However, he isn’t considered a part of new coach Maurizio Sarri’s plans and is therefore expected to agree to the switch this time round.

Mandzukic started 23 Serie A matches in 2018/19, scoring nine goals and laying on another six assists.