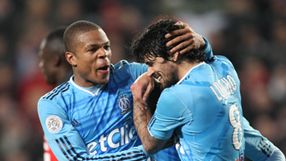 Marseille, beaten 2-1 at home by Lille last weekend, endured a tough opening spell with the hosts continually pressing but they became the better side and deservedly sealed victory.

Rennes failed to create a really good chance despite decent possession in Brittany.

Marseille can now prepare for Tuesday's last 16 match at Old Trafford following the 0-0 draw in the first leg.

No new injuries were reported with fit-again Andre-Pierre Gignac starting as the main striker but Mathieu Valbuena was only a substitute.

Forward Brandao was missing and looks set to skip the United game after returning to Brazil for a break after being accused of an alleged rape.

Rennes, surprise packages this term along with Lille, had won four in a row in the league and are still firmly in the mix with 11 games remaining.