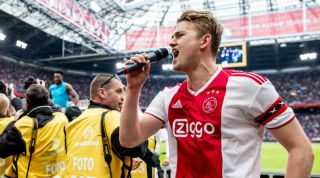 Having won the Champions League last weekend, Liverpool are reportedly now looking to flex their muscles in the transfer market.

Matthijs de Ligt's incredible season as captain of a hugely successful Ajax side has made him one of the most desirable players in the game.

At first, Barcelona were thought to have all but sealed a deal for the 19-year-old, like they did with his team-mate Frenkie de Jong.

However, Barca's grasp appeared to slip when Manchester United reportedly made a hugely lucrative offer.

But, once again, the tables may be turning as Liverpool enter the fray.

They not only have a successful campaign to lure De Ligt with, but also the financial security that that success has bred.

It's believed that Jurgen Klopp doesn't want to make too many changes to his side this summer, but acquiring a central defensive partner for Virgil van Dijk is something he's reportedly keen on.