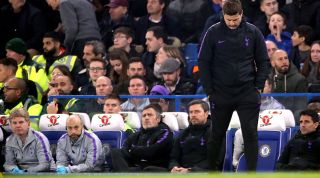 Mauricio Pochettino reckons Tottenham would be delighted to be in their present Premier League position had it been offered to them at the start of the season.

Pochettino’s men are four points ahead of fourth-placed Arsenal, their opponents at Wembley on Saturday, with Manchester United a point further back and Chelsea seven points adrift of Spurs with a game in hand.

Pochettino said: “Everyone from the beginning of the season should be satisfied with that position before playing on Saturday, with the possibility of playing against Arsenal at Wembley with the gap at four points.

“The pressure is on them, not only us.”

Pochettino acknowledges the occasion of a derby, but says every game is significant.

“Today Chelsea and Arsenal are the same level in terms of rivalry,” he added.

The latest in the tale at the top…#PLpic.twitter.com/IINuvyT913— Premier League (@premierleague) February 27, 2019

Tottenham did not get a shot on target throughout the match in a disappointing performance at Stamford Bridge and were undone by poor moments in defence.

Pedro seized upon uncertainty and shot between Hugo Lloris’ legs before the Spurs goalkeeper was beaten by Kieran Trippier’s own goal in a costly misunderstanding.

Lloris said: “Obviously the goals we conceded we could have avoided, then we need to do more defensively and offensively. Only together we can find the solution.”

Chelsea next play at Fulham on Sunday and have 11 games remaining, one more than their rivals for Champions League qualification.

Pedro told Chelsea TV: “These kind of games for us are so important, to recover our confidence, our best football.

“Now every game is a final for us, to get the points until the end to get in the top four.”

The build-up for Chelsea was overshadowed by Kepa Arrizabalaga’s refusal to be substituted in Sunday’s Carabao Cup final with Manchester City, which the Blues lost 4-3 on penalties.

Willy Caballero took Kepa’s place against Spurs, as the world’s most expensive goalkeeper was demoted two days after being fined a week’s wages for the incident.

Pedro alluded to the challenging build-up, saying: “It’s been a difficult situation this week, speaking about Kepa and Willy.

“For us, it’s good. The most important thing is to stay focused on the game.

“A great result for us. It’s so important to win this derby in front of our supporters.”