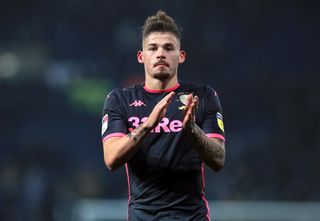 Leeds midfielder Kalvin Phillips has admitted his first senior England call-up has taken him by surprise.

Phillips, 24, is one of three uncapped players to be included in Gareth Southgate’s squad for next month’s Nations League games against Iceland and Denmark alongside Phil Foden and Mason Greenwood.

“I don’t think I was expecting to get into the England squad this early, even before the season has started,” Phillips told Sky Sports.

Gareth Southgate on @Kalvinphillips: "I spoke to him this morning, which was a nice reminder of what it means for somebody to be in their first England squad.— England (@England) August 25, 2020

“I thought it would take quite a while, to be honest, but maybe I got lucky, I don’t know.”

Phillips played a key role for hometown club Leeds last season as Marcelo Bielsa guided them back to the Premier League for the first time since 2004.

He could become the first Leeds player to be capped at senior level by England since Alan Smith against Sweden in March 2004.

“It’s massive news for me and my family and for the club,” Phillips said. “I’m very happy and just grateful for the opportunity.

“My agent rang me (on Monday night) and said Gareth Southgate had been in touch and he wanted to speak to me.

“He rang me (on Tuesday morning) on the way into training and obviously I was very nervous, I didn’t really know what to say.

“But he mentioned he had been tracking me for a while and likes the way that I play, so he wanted me to come and join the lads at St George’s Park.”

Bramley-born Phillips, who made his Leeds debut in 2015 after progressing through their academy, said it had been emotional sharing the news with his family and team-mates.

“I’m obviously a very happy person and just to break the news to my family is the most important thing and the lads here as well, it’s a very touching moment for me.

“It’s massive. As a club we strive to put English people in position like this and I’m one of many that should hopefully go on and make more international caps playing for Leeds United.

“I’m a player who doesn’t take anything for granted, so hopefully I can go there, do well and just get as many games as possible – even if it’s one game, I don’t mind. I’m just so happy.”