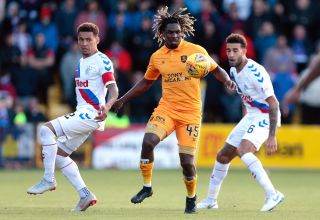 Menga went on loan to Atletico Petroleos de Luanda in the summer to boost his chances of adding to his 10 caps for Angola.

But the Belgian-born striker found game time limited and asked to return to Livi ahead of the transfer deadline.

The 26-year-old featured off the bench against Ross County on Wednesday and is eager to help Livi get past Inverness on Saturday and into the quarter-finals of a competition he insists they can win.

Menga said: “I am very, very happy to come back because I went to Angola and I didn’t play too much.

“I called (assistant manager) David (Martindale) to ask if it was possible to come back. I am back now and very, very happy.

“I played in the African Champions League but I didn’t play many games. When the team are doing well, it’s difficult to change the team. But I kept working hard and when I came here I was ready to play.

“I came to Livingston, trained on Monday and then got an opportunity on Tuesday. It was a difficult game but I gave my all and I will keep doing this.”

Livi had won five consecutive games before their 2-0 defeat in Dingwall and Menga feels they should aim for the top in the cup.

“We have a team that can do well in the league and cup,” the former Lierse and Braga player said.

“I know we lost on Wednesday but if we play like we normally do then I think we can do well.

“When I was in Angola I watched a lot of games and if we can continue to play like that then I think we can win the cup.