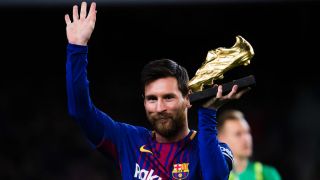 Lionel Messi's father has suggested that there is a clause in his new contract allowing him to leave Barcelona if Catalonia were granted independence and the club could not play in a competitive league.

The Argentina superstar penned fresh terms at Camp Nou until 2021 in November, with Barca confirming a €700million release fee had been inserted.

However, reports have emerged that the club's record goalscorer asked for a clause to be included allowing him to depart if Barca were not playing in a top league.

And his father, Jorge, hinted at such an agreement when speaking to Argentine radio station "The Red".

"All that has been said is not true," he said.

"There is an agreement that Lionel will remain at the club as long as they are playing in a top league.

"If Catalonia gets independence then Lionel would remain as long as they were in a competitive league."