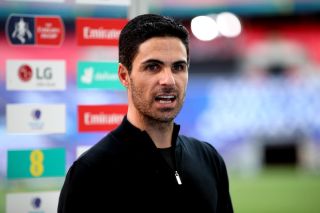 Mikel Arteta has praised his Arsenal side for being fearless in their Community Shield win over Liverpool.

The Gunners were victorious in the traditional season curtain-raiser as they saw off the Premier League champions 5-4 in a penalty shootout.

The game finished 1-1 after Pierre-Emerick Aubameyang’s fine early strike was cancelled out by Takumi Minamino’s first Liverpool goal, but the Arsenal skipper then tucked home the decisive penalty after Rhian Brewster had missed.

When you face the challenge with belief and courage, anything is possible. COYG Proud of everyone! pic.twitter.com/QPOZCj18di— Mikel Arteta (@m8arteta) August 29, 2020

The result means Arteta’s FA Cup winners have beaten Liverpool twice in the past two months, as well as seeing off Manchester City and Chelsea in that time.

Arsenal have endured a wretched run against their traditional top-six rivals in recent years but Arteta – whose side at Wembley contained a number of players who had just one training session under their belt in preparation – believes he is starting to see the corner being turned.

“Two days ago we started to have players back in training and I didn’t hear one excuse,” he said.

“‘Oh they had two weeks in Austria, better preparation’. None of that. When I was in the dressing room today I had the feeling they believed we could win.

“They didn’t feel any fear. They wanted to really go for it and believed they could win another trophy. And they showed from the first minute their courage and their passion.”

While Aubameyang, whose new contract is expected to be confirmed by the club in the coming days, once again stole the headlines this was another good display by the young players Arteta is standing by.

Bukayo Saka was superb while Ainsley Maitland-Niles was named man of the match and then called into the senior England squad on what was his 23rd birthday.

“I get more and more impressed with them every day,” Arteta replied when asked about his young talent – with Eddie Nketiah, Reiss Nelson and Joe Willock also all involved.

“They really want to play for this club. They know the names they are fighting against and they don’t care.

“They want to be better than their team-mates and they really want chances. When they play like they did on Saturday it makes me really proud of them.”