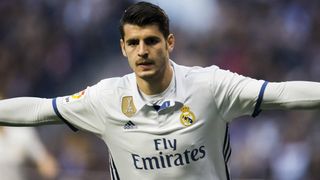 Real Madrid forward Alvaro Morata is not a target for AC Milan, according to director of sport Massimiliano Mirabelli.

Morata returned to Madrid after the LaLiga giants exercised a buyback clause to sign the Spain international from Serie A champions Juventus in the off-season, but he has not played as much football as he expected.

The 24-year-old has been linked with moves to Premier League duo Chelsea and Manchester United, while Milan have emerged as a possible destination after Mirabelli was spotted in the Spanish capital for the Champions League semi-final between Madrid and Atletico Madrid.

But Mirabelli insisted Milan will not be making a move for Morata, who has netted 15 goals in LaLiga this term.

"I went to Madrid to watch a game and not for Morata. He is of no interest to Milan," Mirabelli told Mediaset Premium prior to Milan's 4-1 loss at home to Roma. "Our strategy will be independent of the final placement."

Mirabelli added: "Our plans will not change based on our final position in the table.

"We currently have a young squad, a good squad, and there are some loan players here too who will return to their clubs. We know that we must introduce players to raise the current quality level. When the transfer window opens, we'll act accordingly.

"We have clear ideas, we know that there's a lot of responsibility on our shoulders, as over the next few years Milan cannot be in the position they hold now."

Milan - sixth in Serie A - have also been linked with a move for Atalanta midfielder Franck Kessie and Mirabelli said: "We like many players, but it's premature to talk about it now. Players can be convinced by many things, not just playing in Europe.

"Milan and the prestige of Milan go beyond any position in the table. That is what we are relying on."