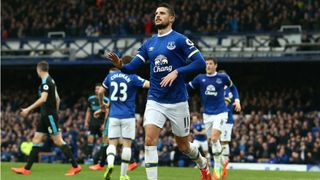 Kevin Mirallas has signed a contract extension at Everton that ties him to the club until June 2020.

Everton chairman Bill Kenwright confirmed at the club's awards night on Tuesday that the forward, whose deal was set to expire at the end of the 2017-18 campaign, would be extending his stay on Merseyside.

And the 29-year-old, who has netted four goals and accumulated six assists across 35 appearances for Ronald Koeman's side this term, is delighted to have pledged his future to Everton.

"This contract is very important for me and my family. I am very happy here – this is the best club for me," the Belgian told the club's official website.

"I've been here five years and it's very important for me to win a trophy here. I've said before that my dream is to win at least one trophy with Everton and I firmly believe we are heading in the right direction.

"This is an exciting time for the club. I hope we sign some top players to fight for the Champions League places next season."

Mirallas' extension will provide a welcome boost for Everton, who will come seventh in the Premier League this season after two successive bottom-half finishes under previous boss Roberto Martinez.

Despite the feel-good factor at Goodison Park, however, doubts remain over the futures of Romelu Lukaku and Ross Barkley, with both players stalling on signing fresh contracts.