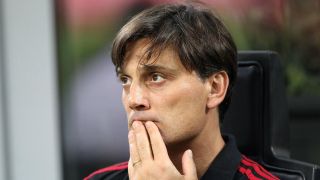 Vincenzo Montella is keen to temper expectations at AC Milan this season despite many considering the Rossoneri as contenders to Juventus' Serie A dominance after an influx of arrivals at San Siro.

Milan have invested heavily in the off-season, signing the likes of Leonardo Bonucci, Ricardo Rodriguez, Hakan Calhanohglu and Andre Silva, to spark hope of a first league title since 2011 – the last time a team other than Juve won the title.

But head coach Montella says it will take time for a new-look Rossoneri to become a winning force in the top flight.

"I am not interested in why people say Milan are title contenders," he told a pre-match news conference ahead of their season opener against Crotone.

"We signed many new players and we first of all need to become a team, then become a winning team.

"I don't feel pressure, nor should we set limits on ourselves, but we know there are more well-drilled sides out there. Milan must become great again over time and we've laid the right foundations.

: "The directors of the club have shown full support to the team. I am very pleased with everything done so far" August 19, 2017

"The objective is to fire up the enthusiasm and pride of the Milan fans who, especially thanks to the work of [directors] Marco Fassone and Massimiliano Mirabelli, have rediscovered their smile."

Similarly, Milan will not be taking their opponents lightly, with Crotone winning six of their final nine league games last season.

"In the last few rounds of the season, Crotone had the kind of results suitable for a Champions League team," Montella said.

"I expect the same sort of match as last time [a 1-1 draw in April], with a patient side waiting for the right moment to strike."