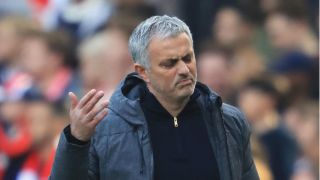 The United manager has called out United's fans previously this season, saying after a dour 2-0 win over Hull City in the EFL Cup semi-finals: "I need to be better, the players have to be better and the stadium has to be better."

And Mourinho again highlighted his supporters' efforts ahead of the crucial continental clash, lamenting a lack of atmosphere at their previous Europa League game against Anderlecht, in comparison to their recent Premier League win over champions-elect Chelsea.

"I see a difference between games," Mourinho told a news conference. "I don't think the Old Trafford atmosphere is consistent.

"Against Chelsea they wanted to play from the first minute to the last. Against Anderlecht it was not warm enough."

With a 1-0 lead from the first leg at Balaidos, United have one foot in the Europa League final.

Jose Mourinho talks about the importance of adding the to the trophy cabinet... May 10, 2017

Europe's secondary competition is the only major trophy to elude the Red Devils in their history and winning the trophy also represents their best avenue into next season's Champions League.

"I am not speaking about myself. I am thinking about the club and the players," Mourinho said.

"It is important for the club to fight for the only trophy that the club has never won before. For this group of players, which is a new group for European success.

"It is very important for the club and players. Tomorrow we will fight hard. It has been a long journey - match number 14 in the Europa League  - and we want to win."