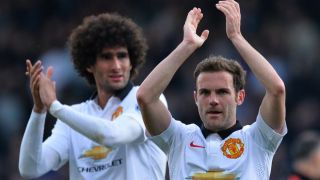 Manager Jose Mourinho has insisted that all the players in his Manchester United squad have a future at Old Trafford.

United's 5-2 friendly victory over Galatasaray in Gothenburg included second-half goals from Juan Mata and Marouane Fellaini, both of whom have been strongly linked with imminent moves away from the club.

But Mourinho was adamant that each and every player remains a part of his plans for the forthcoming campaign.

"If they weren't in my plans," he said, "I wouldn't give them one single minute.

"The squad is very competitive.

"The other day I was telling them that we have 38 matches in the Premier League, we have the possibility of 15 matches in the Europa League, as well as the domestic cups.

"So to be in this squad you have to realise the squad is more important than the individual.

"The club is more is more important than all of us, so to be in the squad you have to be ready for this.

"Playing, not playing, play a lot, play less, play 90 minutes, play one minute, not being selected, everything is part of squad life."

Zlatan Ibrahimovic was among United's other goalscorers at the Ullevi Stadium, opening his account for the club with a spectacular 4th-minute scissor kick.

And the Swede is clearly hoping that Paul Pogba's proposed move from Juventus to Old Trafford will be completed in the near future.

"We have something big going on," he told Swedish television station Kanal 5.

"Let's see if Pogba will also [come], then it will be even more interesting."

United return to action in midweek for Wayne Rooney's testimonial against Everton before facing Leicester City in the FA Community Shield on Sunday.