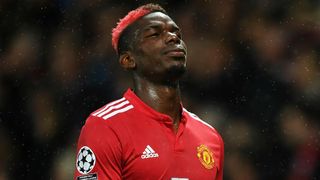 Manchester United manager Jose Mourinho has described rumours that Paul Pogba is set for 12 weeks on the sidelines as "nonsense information".

The club have yet to announce how long the France international will be out of action for, but Mourinho has been quick to pour cold water on suggestions he might be unavailable for up to three months.

Mourinho said: "I don't know if it is 12 weeks or 12 days. Any comment or rumour is totally wrong.

"The player was diagnosed initially after the match because of the conditions of the muscle.

"The decision was one more week to wait to see clearly in the scans. Nobody in this club spoke about 12 days or 12 weeks. It's complete nonsense information."

United appeared to cope just fine without Pogba as they brushed aside a poor Everton side, leaving Mourinho to lavish praise on his side's first-half display.

"I think if the result was two or three nil after 30 minutes I would say it's a clear reflection of the fantastic football we played in the first 30-35 minutes," he added.

"We were ultra-dominant against a team that played with five and four and were difficult to play against. I thought we played phenomenal."