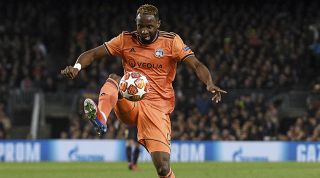 Wilfried Zaha has told Crystal Palace he wants to leave the club this summer so he can pursue his dreams of Champions League football, the Daily Mail reports. After four seasons at Selhurst Park, the Ivory Coast winger is said to have met with chairman Steve Parish to tell him directly that he wants to move on. Palace are reported to want £80 million for the 26-year-old, who has become a key player at the south London club.

Manchester United are preparing a £40 million swoop for Lyon star Moussa Dembele, TheSun reports. Ole Gunnar Solskjaer is said to be impressed by the former Celtic player’s form since joining the Ligue 1 side. A move for the Frenchman would likely signal changes ahead for Romelu Lukaku at Old Trafford, the paper says. The Belgian, who United paid £75 million for, is said to be considering his options.

Chelsea will make a decision on Maurizio Sarri’s future at Stamford Bridge after the Europa League final against Arsenal, the Daily Telegraph reports. Since arriving from Napoli, the Italian head coach has secured Champions League football next year and brought a trophy within the Blues’ grasp. However, questions remain over whether it will be enough to keep him at the club after the summer. Several Italian sides are said to be interested in offering him a job back home if he parts company with the Blues.

Newcastle will have to stump up £16.5 million to sign up Salomon Rondon permanently, the Daily Mirror reports. The Magpies are said to have been put on notice that they will have to make a decision soon or face competition for the Venezuela forward, who scored 11 goals while on loan from West Brom this season.

Frank Lampard 'to be next Chelsea manager' with Maurizio Sarri on brink of sack https://t.co/dnEzGG9GSNpic.twitter.com/3LRXTTo02e— Mirror Football (@MirrorFootball) May 15, 2019

Tammy Abraham: The Chelsea striker, 21, has been linked with a permanent move to loan club Aston Villa but is also a target for Bundesliga side RB Leipzig, The Sun reports.